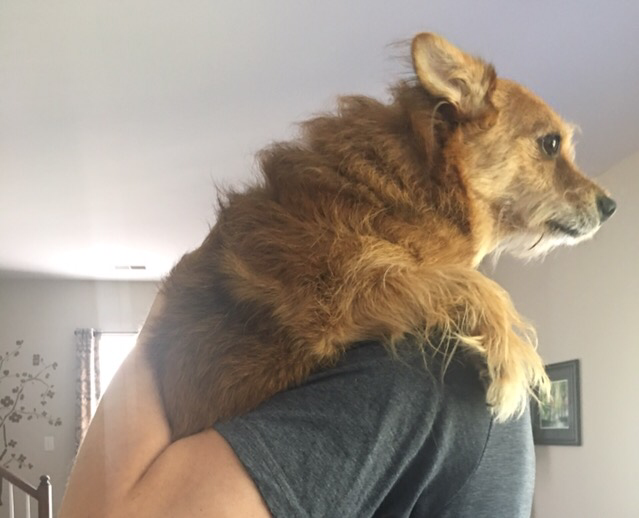 There’s nothing quite as exhilarating as being told that you have all of five minutes to evacuate your home.

With our house for sale, we are at the mercy of whenever prospective buyers want to swing by and take a look inside. We have it set up to give an hours’ notice but that doesn’t seem to always work out. On Monday, I came home from work, happy and dumb like normal, when I noticed an SUV sitting in front of my house. At first I was a bit concerned that all of those nights of amusing myself by scanning the Reddit/Conspiracy page were catching up to me. ‘The CIA is staking me out!’

Then Kristina sent me a text saying, simply: “Grab the dog. Leave the cat. Get out.”

I still assumed my life was in jeopardy. Turns out, the people who were being shown our home on Tuesday at 5:30 mixed up the date and showed up on Monday at 5:30. Classic sitcom material.

I ran our dog, Tucker, out to the front porch where, once he saw his leash, proceeded to pee all over the front steps. I guess that’s one way to make the inside of the house smell better. “Hey, Charlene, this house doesn’t smell like dog urine!” My kids meanwhile ran around the yard, in plain sight of everybody, screaming and trying to drag one another around on the ground. I’m sure the lady in the SUV would love knowing that a family of cavemen lived in the house before her.

That night we also had another showing at 7:15 so essentially I was banned from my own home for two and a half hours. That doesn’t seem like a long time until you have two hungry kids and a spazzoid dog with you who can’t be around any other living creatures without barking endlessly. My food options were limited to the Chick-Fil-A drive-thru or grabbing some of those unknown rotisserie hot dogs at the gas station. To be honest, I’d rather eat my own foot than even sniff one of those ambiguous sausages that bathe in airborne germs all day. Chick-Fil-A it was.

After waiting in line for most of the night, we drove to a local park to eat. Somebody didn’t give my kids the memo because they ate all their food in the backseat before we even got there. So while my children went and blew off some steam on the playground, I had a romantic chicken dinner alone with my dog and a village of mosquitos. I got so many bites below my shorts that I currently look like I’m wearing polka-dot leggings.

Still, we somehow had another hour to kill so we went for a walk, stopped by Dairy Queen for milkshakes, and then drove past my wife’s store slowly, making funny faces. Sadly, I don’t think her customers noticed us. Me and the boys had a good time and joked around in the car, singing along horribly to old Chicago songs. “AFTER ALL THAT WE’VE BEEN THROUGH, I WILL MAKE IT UP TO YOUUUUU! I PROMISE TOOOO!”

It was hectic and only a microcosm of what our future will be like but it was a nice reminder that I’m making the right choice. No screens in our faces. No distractions. Just us. Having fun, driving around, and watching our dog growl at squirrels.